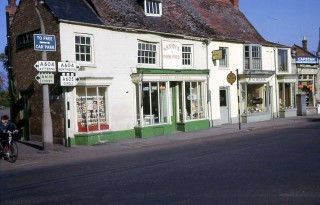 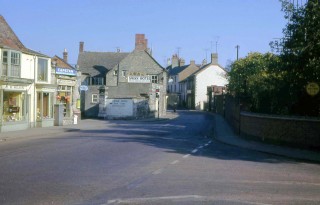 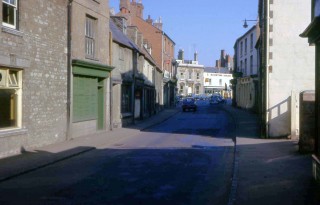 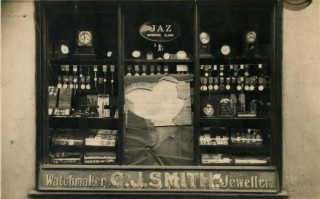 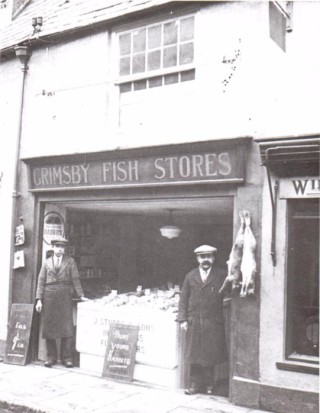 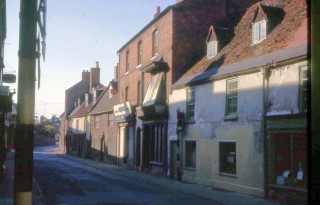 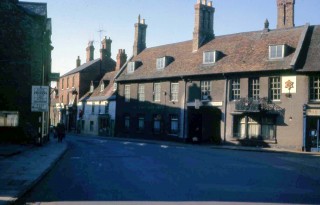 High Street looking towards the Bridge, 1965 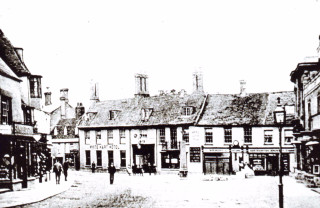 Along the High Street

There was Saxby’s pork pie shop.

Then Harry Wilson’s. He sold prams and bicycles and toys and radios. He also sold paraffin and his son Don had a van and delivered paraffin all around the area.

Then came a small lock up shop run by Olive Sharp and Val Drain. They sold newspapers and cigarettes and sweets and a whole host of other goods. If you wanted something a little obscure you didn’t give up until Mrs. Sharp told you she hadn’t got it.

Next was the Swan Hotel. This was a substantial and well patronised Pub. with bed and breakfast accommodation. Reg White and his wife were the proprietors. In the early days of being in Thrapston we occasionally called in for lunch. Unbelievably at that time a three-course lunch cost two shillings and sixpence!

There was the Men’s Hairdresser. The barber was Norman Curtis and you were guaranteed ‘a short back and sides’ He also stocked ‘gentlemen’s requisites’ etc.

There was Les Chapman’s shop for Jewellery and Watch Repairs.

Then Mr. Stubbs’ Wet Fish shop. This was a traditional fish shop with the front open directly onto the pavement, and the fish was displayed on a marble slab.

Harris’s shop was double fronted and on one side Len sold radios and electrical goods and on the other Bobbie sold confectionery.

Then came the King’s Head public house. There was a passageway at the side of the pub to give pedestrian access from the high street to Cosy Nook and this has been recorded by a name board affixed to the side wall of the bookie’s shop.

Then came Burton’s grocery stores. It was managed by Mr. and Mrs. Gilbert.

Next was the saddlery, owned by Mr. Laye and which was later taken over by Mr. Javes.

I think lastly was Southams estate agents and valuers.

The White Hart Hotel was at the junction of High Street and Chancery Lane and was a very old coaching inn. What a pity it couldn’t have been saved from demolition. Joe Going was the manager.