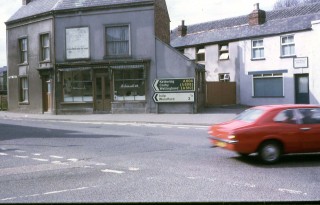 On the corner of Bridge Street and Cosy Nook was Johnson’s butcher’s shop.   At the time we came to Thrapston this was in the process of being taken over from Shelton’s by Mr. Bert Johnson.

The business was later relocated to the High Street and Bert’s grandson is now the butcher.

The shop was pulled down, presumably after being compulsorily  purchased by the County Council for road widening which also took in five or six metres of the other frontages on Bridge Street.

The building that remains was where the butchering, processing, preparation and storage etc. was carried out and, having been extended, is now an undertaker’s business. (Editor:It became a Dentist in 2013)

In Cosy Nook is, of course, the Plaza Cinema.   It still looks more or less as it always did.   It was quite popular in the early days but I suppose it’s demise was brought about by the increasing availability and popularity of television.   Since its film days it had been a bingo hall and then became the Praise Community Church.

Further along Cosy Nook was a row of small cottages, one of which was occupied by Fred Cobley and his family.   Fred was the window cleaner and chimney sweep.

Eventually, and I’m not clear about dates, these cottages were demolished, the whole of the site was cleared and Douglas Scott erected a very substantial woodworking workshop.

Beyond Cosy Nook was the back land that was the builder’s yard and the market garden.   This was eventually developed and became Cottingham Way and is a light industrial estate.

Extract from: Recollections of Thrapston and its people after the Second World War. By Bernard Dennison.  (Recorded October, 2005).
Tags
Bernard Dennison (8)
Cozy Nook (2)