You are here: Home>Topics>People>Daniel Yorke 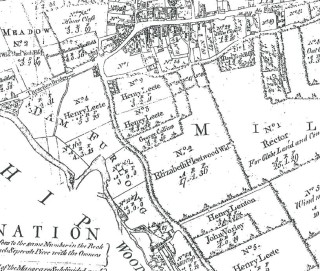 It would be almost impossible to look through 18th century records of Thrapston and district without sooner or later coming across the name of Daniel Yorke. He was practicing as an attorney there for over forty years.

He was the tenth of a family of thirteen children born to Rev. John Yorke, who had married Mary Ponder during his ministry at Rothwell. Mary’s mother had been Susannah Ward, sister of Sir Edward Ward, who was purchasing the manor of Stoke Doyle at about this time. Mary’s connection with Sir Edward was to prove very useful to Rev. John and his family.

The first Yorke baby – Edward – was born while they were still at Rothwell. In 1694 John became vicar of Culworth, Northants, and it was there that the rest of his large family was born. Edward and the third son, William, were educated at Charterhouse, through the influence of Great-Uncle Edward Ward who had become a Governor of the School in 1701. It is not clear whether Daniel was privileged to go there too, or whether the younger members of the family were educated at home, or elsewhere.

Beneficiary of Sir Edward’s Will

Sir Edward died in 1714 and among his bequests was £100 for Mrs Mary Yorke for the use of herself and her children. Edward, the eldest, now 21 , was at St John’s Cambridge, evidently the apple of Great-uncle’s eye, for he had his own legacy of £50. He was following his father’s footsteps in training for the Church.

The following year, 1715, tragedy struck the Yorke household. Poor Mary Yorke failed to recover from the birth of her thirteenth child. The eldest surviving daughter, then aged 14, must have taken charge of the little ones – Samuel (10), James (9), Daniel (7), Dorothy (3) and little month-old Mary.

Sir Edward Ward’s son (yet another Edward!) succeeded his father as Lord of the Manor at Stoke Doyle and also as patron of the living. As soon as the living became vacant it was offered to John Yorke. We have some idea of the household possessions which were moved there from Culworth from John’s inventory of 1730.

Stoke Doyle looks a perfectly idyllic place where life is always serene and unruffled. But not for John Yorke. His new church was in a “very ruinous” condition, and the young Edward Ward wished to have it rebuilt at his own expense, replacing the steeple with a tower. The Bishop could not refuse so generous an offer, but the Rector wondered how he was to manage to take services without a church.

“Your Parsonage hall is large enough for your congregation and has somewhat the form of a chapel”, the Bishop wrote.

Yorke agreed it was large enough, but said it might be “some inconvenience to the family if your Lordship should forbid the use of it on weekdays as a Common Room (as I have hitherto used it, winter and summer).”

“It should not seem dedicated and set apart,” the Bishop replied. You will take care to remove from the old church the communion table and other moveable seats, mats, desk and pulpit, and one of them at least to be placed with the furniture in such part of the hall as you shall think fit. All which may be removable after Divine Service. If not, the Hall with such furniture in it will not be proper for your Common Room.”

I like to imagine the little Yorkes – Daniel now 13 – clearing away the paraphernalia of their daily living every weekend and carrying it from  its storage place (probably in the Rectory’s copious outbuildings) such of the church furniture as Father deemed “fit”.

Young Daniel must have watched with interest the dismantling of the old building in the spring of 1722 and the laying of the first stone of the new church on 28th May. It seems incredible that the roof was on before winter set in. It must have been a very exciting time for the Yorkes.

Then followed delays. The summer of 1723 was “too little to dry the walls” so the joinery was postponed for a year. The tower was the last thing to be finished and it was intended that the Rev. Yorke should take the opening service in the summer of 1725, but Mr Ward did not come to Stoke until the summer was over. Then the Rector fell into a bad state of health and was only able to officiate at services in his house for the next
two years. There seemed little probability of his recovery. It is not recorded what ailed him, but it is fair to assume that the worry of the new church was a contributory factor.

Daniel was 19 by the time the new church was finally opened in 1727. Since there is no record of his education and training one can only guess that he became articled to a local attorney.

Daniel is first mentioned as an “Attorney” in Ward-Hunt documents of 1739.

I like to think that he had come into contact with the Squire family during the 1730’s when the newly constructed Navigation brought much increased river trade to Oundle and Thrapston. There must have been legal matters between the proprietors and local landowners passing through his hands.

Daniel was  33 years old when he married Penelope Bletsoe. This made him brother-in- law to one of the Squire’s sons, who was married to Penelope’s sister, Elizabeth. The following year Daniel had the unhappy task of arranging the administration of his new brother-in-law’s estate.

Daniel’s marriage and the baptism of his children are all recorded in Thrapston registers. Betty was born in 1743, John in 1745 and William in 1748 – a small family for those days. Penelope died in 1755 and Daniel did not remarry.

History was repeating itself – little 7-year-old William was the age Daniel had been when he lost his own mother.

In the 1750’s Daniel was acting as Steward of Warmington manor. At this time he is mentioned as an overseer of Thrapston Rates for the administration of the Poor Law.

He himself was rated for a house with Coneygarth Close  and Kiln Close (now Peace Park and land opposite on Market Road, Thrapston, see enclosure map).

Daniel’s brother, William, had a very distinguished legal career in London, He was knighted and became Lord Chief Justice of Ireland. When he died in 1776 he left a long detailed will for Daniel to execute. All the unmarried or widowed ladies in the family received a handsome legacy and he was very generous to Daniel’s son John who wished to buy himself promotion in the army. At this point he was a captain in the 33rd Regiment. Large portraits in gilt frames of William, Charity his wife, and her parents, came to Thrapston and were duly hung in Daniel’s hall. He inherited the residue of William’s estate which included a house in Marylebone and one in Ealing. Some special little treasures of a personal nature were left to him too – William’s silver inkstand, silver shaving box, silver hand candle- stick and gold-headed cane. Any law books which Charity did not wish to keep were for Daniel, except where there were spare sets. These spares went to John Bramston for the use of his sons if they too read law!

About this time Daniel lent his eldest son John enough to buy a Majority and later a Lieut-Colonelcy. John sailed for America in 1776 and returned a Colonel. He seems to have had difficulty in making ends meet although he had recently received a legacy of £2,000 from Uncle William. He is recorded as being “not robust” but he lived on to serve 30 years as Deputy Lieutenant of the Tower. Daniel was a bit grieved that John had never repaid his loans and he left him only his share of Uncle William’ s money plus the two largest portraits “… considering the extraordinary expenses I have been at in his education more than that of his brother” wrote Daniel, somewhat peevishly.

I think, however, that Daniel would have been rather proud of the grandson, Charles, born eventually to John’s wife. He too went into the army, was commissioned at 17, served in the Peninsula and Waterloo, becoming at the end of a long career Field Marshall Sir Charles Yorke, constable of the Tower,

William, stayed quietly at Thrapston. In 1783 he married Margaret Tipton from Shrewsbury.

William and Margaret’s only surviving son John (1788 – 1862) became a Thrapston banker for a time with Eland’s Bank, the forerunner of Barclays. He was much respected as a magistrate and was Deputy Lieutenant for the county.

He is recorded on the 1861 census living in Thrapston House, Huntingdon Road. Also living there was his wife Juliana and son William, who was a Solicitor.

The east window in Thrapston church was “filled with stained glass by many of his Friends”. Daniel would have been proud of that grandson too.

A kindly act of Daniel’s must be remembered. In his old age he always had several poor Thrapston widows to eat dinner with him every Sunday. He bequeathed them all 5s apiece and a new pair of gloves. His earthly remains were laid in the chancel of Thrapston Church in January 1786. The stone slab marking the place has a Latin inscription which translates:

“… unstinting of himself, kind to others, most joyful with friends, charitable to all”.