You are here: Home>Topics>People>Denis Barber 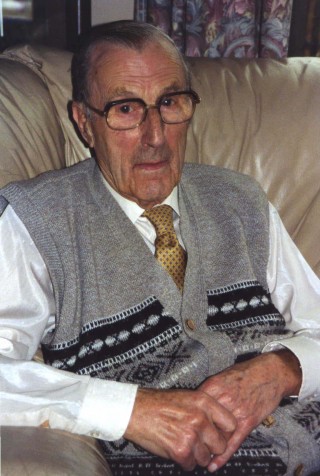 Denis was born in Thrapston in September 1917, the second son of Benjamin and Eliza Barber. His elder brother was John.

His father ran a Fruit and Vegetable Business and Denis often had to help out. The family lived in Thrapston High Street, above what is now the Bread Basket.

One of his regular jobs was to go to the Post Box after work, when his father had prepared the mail. Between the shop and the Post Box were two hanging shop signs and his aim each time was to jump high enough to hit them, on the way there and to try and hit them again on the way back while they were still swinging! Another job was to take round deliveries on the shop bike, often a round trip of over twelve miles, this after cycling to school at Kettering.

He passed the 11+ and attended Kettering Central School. Always good at sport, he won the County High Jump and represented them in the Relay. He also ran at Wembley during his Army days.

He joined the Army at the start of the War and served in the Royal Army Service Corps as a Mechanic in a Workshop Platoon. He was stationed in many areas in England and during this time played trumpet in a dance band called “Leo and his Rhythm Boys”. He also saw service in France, Belgium and Germany. During home leave in October 1940, he married Meg Homewood from Islip and, in 1944, while he was in France, his daughter, Pat, was born.

He returned to Thrapston in 1946, where he rejoined his father in the family business of B. F. Barber & Son. 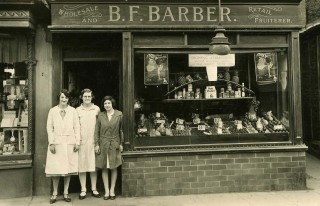 This involved early morning trips to Covent Garden Market and late nights back from Spalding Auction. During his life he employed many local people and bought from local suppliers wherever possible. Later, he was joined in the family firm by his daughter, son-in-law and eventually, his two grandchildren, of whom he was very proud.

His love of sport brought him to snooker, tennis, but most importantly, football. He played for Thrapston Town Football Club and when his playing days were over, served as Club President and supported the team at home games until he was well into his 80’s.

Another passion was for the Thrapston Town Band, who he helped to reform after the War and played cornet for many years. His last outing was to the Christmas Band Concert in December 2007, where he was presented with a certificate for all his years of support. Denis was also Vice-President of Thrapston Amateur Dramatics Society (TADS) for many years.

On returning home from the War, he immediately joined the Thrapston Branch of the Royal British Legion where he held many offices and supported them in many ways right up to his death. He worked at raising funds for the Branch, running an annual Gymkhana on land off Oundle Road and organising regular Whist Drives where he not only ran the evening but acted as a taxi man as well. He was very proud to be awarded the Royal British Legion Gold Badge, an honour which was very important to him.

He had to retire to nurse his wife, Meg, through ill-health and did this with great patience until she died in 1995. And then he discovered another sport at the Islip Short Mat Bowls Club. This he played with great enthusiasm until just short of his 90th Birthday, and was where he met his long-time companion, Sybil.

Yet another group he enjoyed was the Thrapston District Local History Society and his knowledge and love of old Thrapston was immense. His memory never let him down and he enjoyed sharing his experiences with anyone who was interested.

Denis was a happy man, a man with a zest for life and a willingness to help others. It was well known among those who knew him best that he had a great love of speed and many a passenger has climbed out of the passenger seat somewhat shaken. When he had to stop driving, he was never happy with the speed of his Mobility Scooter. He ended his final 20 months at Clanfield Residential Home, Islip where I am sure he was happy, but very frustrated that the stair lift took a whole 1 ½ minutes.

Today, whilst we are sad at his passing, we can remember with affection the impact Denis had on our lives and, that by knowing him, we, and our community, have been greatly enriched.