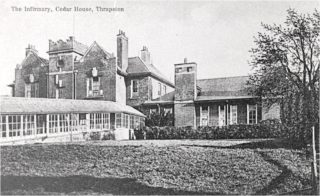 The Infirmary at Cedar House c1920

In 1897, a newly appointed Local Government Board National Inspector adversely reported that in his opinion, the Thrapston Union should provide better nursing accommodation and more bed space for the sick.

The immediate response of the custodians of the local purse, the Board of Guardians, was to fight a rear guard action , led by Colonel J S Stopford Sackville. The Union countered with a proposal of immediate repair to the workhouse building wherever it was needed.

However, the National Inspector stood his corner and wrote back to say that “the cost to your ratepayers of a new infirmary building would very little, if at all, exceed that of patching up the old miserable buildings“.

In the continuing correspondence the Inspector insisted that his aim was to obtain reasonably good and comfortable accommodation for the aged sick and infirm at the smallest cost to ratepayers.

Eventually the Thrapston Union agreed to the Inspector’s proposals and the new infirmary opened in 1900.

A levy of 1s 2d in the £ was placed on the local rates and raised £7,700 which paid for the construction of the Infirmary.

The architects fee, from Blackwell & Thompson from Kettering, was £338.