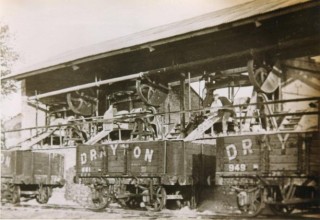 The 3’ 0” gauge railway system had three main branch lines extending into ten miles of track. The stock of ten engines at Islip increased over the years with the opening up of fresh workings. Some engines came new to Islip and some were acquired second-hand, the maked names ranging from Hunslet, Bagnall, Kerr and Kilmarnock. A few of them were of the saddle tank type and the others were of side tank design.

Most of the engines were painted black, but some still had traces of green livery. There were Hunslet and Bagnall engines working the Twywell line until the company purchased a new Dick Kerr engine in 1918.

In I920 two new Kilmarnock engines of the same engineering design came and they were numbered “Seven” and “Eight” and carried Slipton name plates. These engines were somewhat under-boilered in relation to the cylinders.

When the Twywell quarry closed the working lives of these three engines came to an end. They were stored at the furnace yard in a red corrugated iron engine shed until they were cut up for scrap in 1953.

Some of the engines exchanged the wagons in the tipping docks at Willow Close mine and the Slipton end of Church mine. There were also the two tipping docks in the end of Marsh’s quarry at Lowick which were also serviced. In the furnace yard the metre gauge railway track bridged the furnace bays” The engines pulled the hopper wagons onto them so that their loads could be tipped into stock for use at the furnaces.

All engines were fitted with spark guards because they had to pass through corn fields and by woodland areas on their way to the quarries.

The fact that these small engines were made to negotiate such excessive gradients was an incredible feat. These engines had manually operated brakes which were not sufficient to keep control of a loaded train when travelling down some of the steep inclines. The shunter would alight from the engine with two wooden spraggs which he would thrust in between the spokes of the leading wheels of the first two wagons. This manoeuvre helped the engine to keep control of its train of loaded wagons. As it reached the bottom of the incline the driver reversed the engine so that the shunter could remove the two wooden spraggs, thus they would continue on their journey.

When Islip closed engine number five was used for hauling scrap and the lifting of the metre gauge track. The metre gauge track was flat-bottomed and it was dogged onto wooden sleepers. When all these engines were cut for scrap in 1953 they had indeed reached the end of the line.

This is an extract from an article in “Strapetona“, the magazine published by Thrapston District Historical Society and is reproduced with the permission of the Society.