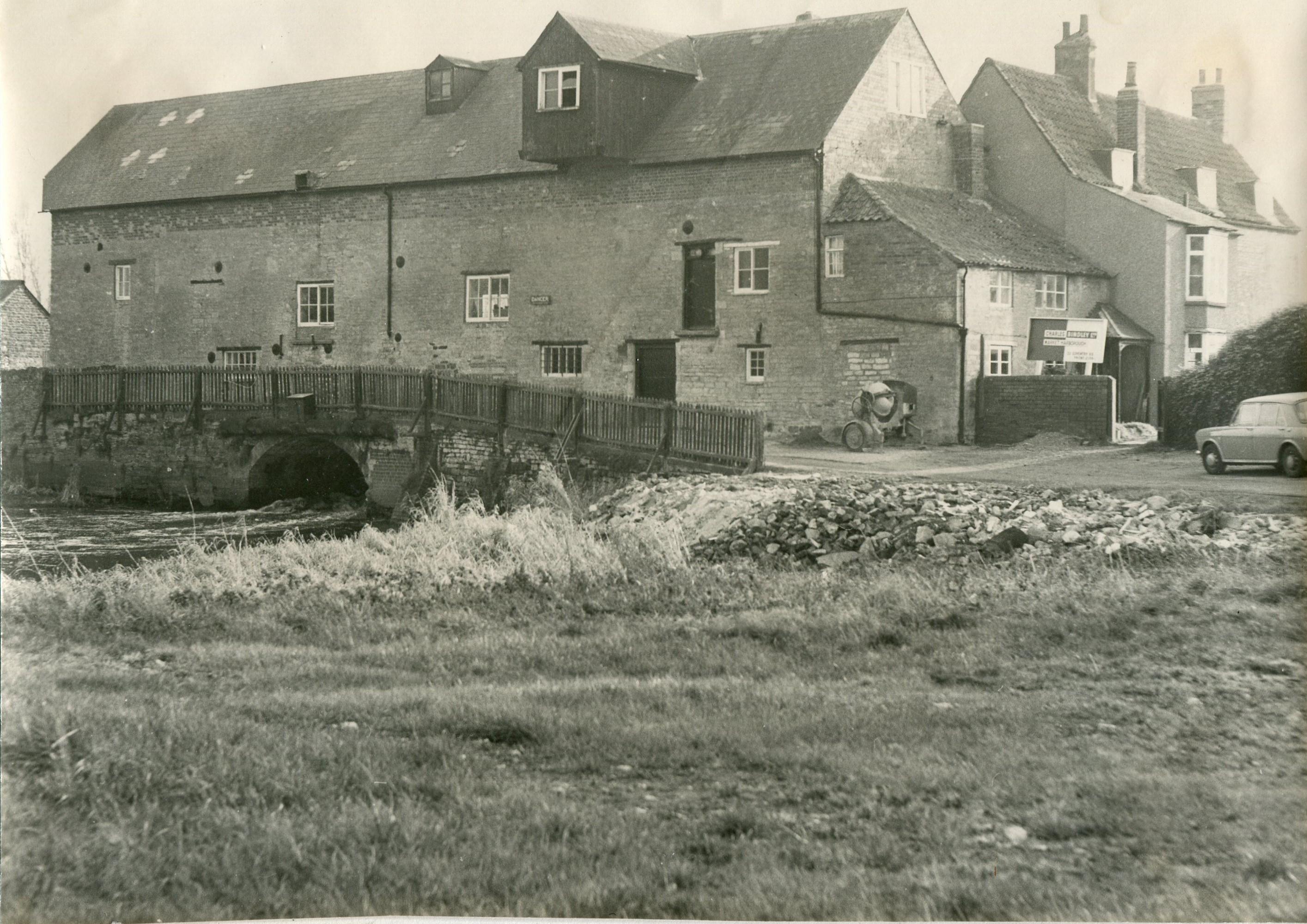 The history of Islip Mill is taken from an extract from an article in “Strapetona”  written by W.P.Stafford – no date is given and there is no date for the start of the working of the Mill.

However in 1890 a continental roller system was installed which enabled the mill to produce  a sack and a half of whiter flour in an hour.

Power for the Mill

At first the Mill was driven by water, but in 1924 the capacity of the Mill was doubled when it was remodelled and a new gas powered plant was installed.  A staff of 7 men worked in the mill at this stage.

During the first World War the mill was kept working for 24 hours a day.  Mr. Stafford and his father did 12 hour shifts alternately with the help of two labourers.  It was not until 1918 at the end of the war that the older Mr. Stafford retired to mend sacks at home.

During the 2nd World War there was another 2 shift system, but call up meant there was a shortage of labour and a girl had to be brought in to help.

Candles were used up to the end of 1945 to light the rollers, and then a 25 volt dynamo was bought to light 10 40 watt lamps

The Mill finally closed in 1960.  Small bakers were put out of business when bread was baked in bulk by big businesses and the flour from the mill was no longer needed.

113 Years working in the Mill

Our family record of working here was grandfather 40 years, my father 37 years and mine 36 years time. My grandfather walked to and from Wadenhoe everyday to work at the mill, until he moved home to No 4 Barrack Row Islip. These houses have now disappeared.

At this time there were four pairs of millstones in use – two pairs of Derbyshire Peak stones for grinding barley etc. and two pairs of French burr stones, for grinding wheat. This was “dressed” through “reels” some being clothed with fine wire mesh to sift the “middlings” from the coarser bran. The “middling” were again dressed in a reel called a “bolter” which was covered with a woven cloth. The flour passed through and the overtailing “middlings” were further reduced through a pair of smooth rollers for further treatment on the bolting reel. The overtails this time were regarded as offal and sold as pig food.

This type of grinding, described above, being of the “sudden death” sort, resulted in flour of poor colour and there was a public demand for whiter flour. During the early 1880’s, flour was imported from the Continent, much whiter in colour, being manufactured on a roller system with a gradual reduction so there was less bran to contaminate the flour. In the mid 1890’s such a system was installed at Islip Mill with a capacity of 1½ sacks (39 stones) of flour per hour. This again was graded straight off the mill as “patents” – a very white flour, with the bulk called “fine” or baker’s flour. The bran and ‘pollard’ was sold as animal feed

The mill at this time was driven with water wheels, one was an ‘undershot’ wheel, the other, of greater power a ‘breast’ wheel. There was an auxiliary ‘portable’ steam engine only used when the water was too low or too high.

Father came to the Mill

In 1910 Mr Daniel Hipwell, because my grandfather the miller was getting on in years, persuaded my father who then worked at the Port Mills at Old Trafford, Manchester, to come and work for him at a wage of 30/- per week. He bought a house and rented it to my father for 5/- per week.
The Great War came in 1914 and the mill was working 24 hours per day until Saturday at l p.m. My grandfather did one 12 hour stint and my father the other, changing over at 6 a.m. and 6 p.m. The two or three day men worked from. 7 a.m. to 6 p.m.

The shift work continued to 1918 when my grandfather retired from active milling, just mending corn sacks at home.

One incident I vividly remember was the March 1916 Blizzard. My father, was on the day shift and, setting off down the house steps, fell over and brought down the telephone wires.

There was an old candle lantern kept in the bottom of the mill for the purpose of lighting the way to the eel traps to draw water off or on to them. I imagine this was no joke on a rough night. The eels were weighed and boxed up for the morning train to London.

In 1921 an old army surplus ‘J’ type Thorneycroft was purchased to deliver flour etc. During 1923 and 1924 the milI was remodelled again by Henry Simon Ltd of Manchester. With some of their modern equipment together with some of the originaI rollers and centrifugal dressers made by William Gardner of G1oucester, the mill capacity was doubled. At the same time it was realised that the water power and the old “portable” steam engine would not be sufficient to run the extra load. The old engine was sold and drawn by horses to Thrapston L. & N.W. Railway. Quite an event I remember at 13 years old.

The new power plant was a 60 H.P. Tangye gas engine running on producer gas. The “coffee pot” scrubber and silencer was built just outside the engine house. The grand “start up” was about mid 1924.

I started work at the Mill

In 1926 I started work at the mill, having been laid off at Smith and Grace works at Thrapston owing to the General Strike. My first job was mending sacks on a sewing machine for £1 per week, working from 7 a.m. to 6 p.m. with an hour for lunch from 9 a.m. to 10 a.m. and dinner from 1 to 2. My week finished at 1 p.m. on Saturday.

The mill staff at this time consisted of my father, William Stafford, the miller, Ralph Knight of Islip, warehouseman; Arthur Sillet of Thrapston, millstone dresser; “Chick” Broughton of  Thrapston, engine driver and sack cleaner; Jack Arnold of Thrapston, assistant to R.Knight, and Fred Hayward of Thrapston, wagoner and general hand as well as myself. A little later “Chick” left and Mick Meadows came and took over the sack mending and cleaning.

I went on to the weighing and packing. After a while Arthur Sillet started to teach me to dress the mill stones, but before I was with him long, he had a hand trapped between a chisel and grindstone, leaving him with a permanently stiff hand and he had to leave the mill, “Derb” Wilson, a journeyman millwright from Ringsted then finished my training as a stonedresser. Incidentally a stonedresser could always be recognised by what was known as “blue hand”. This was the colour of the backs of their hands which became pitted with fragments of steel flying off the “mill bills” when dressing the hard stones. I still have some in my hands.

This was the general pattern of things, apart from comings and goings until 1939, it being pretty obvious to everyone that war would come. The very next day after war was declared we went on to a two shift system – my father in charge of one shift, myself the other. Several of the lads
received their calling-up papers at various times making us short of labour. In fact at one time, a girl was employed on the weighing and packing. We were under Government control from the start and during the various stages of the ‘blockade’ the “percentage of extraction” rate ~ being continually altered. Peacetime extraction rate was from 70% to 72% flour. Obviously the higher the rate the darker the flour, making the brown bread we knew so well.  It was quite a headache altering the cover numbers on the flour dressers to get the required extraction which was varied quite often. At one period if I remember rightly we got up to 90%. At the same time there must have been in the Country a large amount of low-extraction Canadian flour – a very strong white Manitoba type, which we had to mix with our own. A further admixture was that of Calcium in the form of creata preparata to counteract the very high incidence of rickets such as occurred in Ireland during 100% extraction rates in the Great War. At another time dried milk was plentiful and I had to put another mixer in to dredge this at the given rate into the flour.

Up to the end of 1945  candles were still used against the rolls. Then a 25 volt dynamo was purchased to light 10 forty-watt lamps. It seemed like flood lighting!

At the end of 1946 and early 1947 Messrs E.R. and F. Turner Ltd of Ipswich were responsible for a further remodelling to the same capacity viz 3 sacks / 60 stones per hour. When the last of the original Gardner machines were thrown out they had had quite a life and were about useless. My father retired about this period.

In 1950 I remember one of the gudgeon pins snapped in half on the undershot wheel. This would have meant an expensive repair bill and the “powers that be” decided to go over to electricity. After removing this wheel (part of this ring is still in the old stack yard) and its associated gearing, I had our friend Mr Harrison of Thrapston “burn off” the length that protruded into the mill and bricked the hole up. This wheel, I  understand, is still in its place. A 60 H.P. motor was installed to drive the mill proper and a 12 ½ H.P. motor for the hoist, bean/maize splitter and the oat crusher.

The old gas engine was broken up for scrap and the engine house used as a store.

In 1960 “big business” finally closed us up by forcing small bakers out of the trade and inflicting on us all the mediocre “Pap” masquerading as bread. The mill carried on for a few years buying and selling flour and mixing pig feeds. There was no future in this for me and I left in 1962.

Of course there were many incidents during my time at the mill.

On March 18th 1947 the floods completely washed out the eel traps which were situated between the mill “head” stream and the main river.

A further disaster followed on Sunday the 23rd when a hurricane force wind blew off the engine house roof and deposited it in the river.

There was another side to working at the mill. We were close to nature. There were nearly always swans about – the mating dance has to be seen to be believed. We could sometimes watch the antics of the otter as they basked in the sunshine on the osier bed. When they were disturbed they slid into the river with scarcely a ripple. On occasions kingfishers have found their way into the mill.

This is an extract from an article in “Strapetona“, the magazine published by Thrapston District Historical Society and is reproduced with the permission of the Society.