You are here: Home>Topics>People>Blacksmiths>Islip Blacksmiths 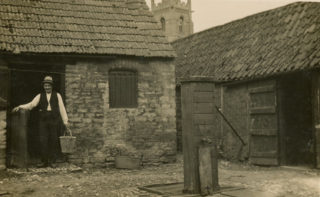 The shop (with house attached) was built in 1763 and is constructed in limestone with pantile roofing. The glazed window panes are of the overlapping type. The forge and house are part of the Drayton Estate (Lowick) now owned by the Sackville family.

One of the Sackville family’s initials, ‘W.B.S.’ are inscribed on the face of a set of built-in iron drawers which date back to the original building. The anvil and the forge bellows (both still in use) are known to be at least 100 years old.

John was born in Islip, the 2nd son of Eli and Lily Hudson, the village blacksmith. He was baptised in Islip Church on 6th June 1869.

By 1891 he was working as a journeyman blacksmith, based at his father’s forge. When Eli died in 1900, John took over the business with his mother.

He never married and remained working in the village his whole life. He did not serve during World War 1 as he was too old to enlist.

On 29th March 1921 he was appointed Parish Constable for Islip by the Divisional Police Court in Thrapston. In 1939 he was living at the Forge with Ethel Jones, his housekeeper.

Administration of his estate was granted to his brother and sister-in-law James and Ethel Smith, his effects being valued at £5289 5s 7d.