The Kings Arms Public House is a Grade II Listed Building and has a small number of buildings at the rear that may originally have been used for both domestic and agricultural purposes, but equally could later have been used in the boot and shoe industry. 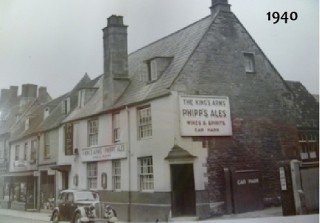 It is an 18th century building with a date stone 1839, which reflects the re-modelling that was carried out in the 19th century.

The Kings Arms has a large function room and it is probably for that reason it has been used for many auctions over the years.

The Kings Arms was available to be let.  (M Brown Directory)

John Sanderson was listed at the pub.  (M Brown Directory)

The son of Mr Branson of the Kings Arms Inn met with a very serious accident. The youth is engaged as a clerk in the goods department in connection with the London & North Western Railway and is highly esteemed for his business-like habits and good conduct. On the morning of the 15th, he was taking account of the arrival of a goods train and for that purpose ascended one of the detached trucks (unfortunately perhaps too soon) when another truck came with great force against the one he was standing on. The youth was unable to keep his footing and fell on the metals, when one of the ponderous wheels passed over his right arm, completely smashing it.  He was immediately taken home, and medical attendance having been procured. In consequence of the limb being so crushed it was considered necessary to amputate it above the elbow joint.  The poor sufferer bore the operation with great fortitude and is likely to do well.  (Northampton Mercury)

John William Perkins, of Islip, was arrested for assaulting PC Tate of Thrapston. At about 11 pm, PC Tate found John Perkins outside the Kings Arms Inn insulting the landlord Mr Branson. Perkins struck PC Tate and also knocked off his hat. He was found guilty and sent to gaol for one month. (Northampton Mercury)

John Branson, for several years the landlord of the Kings Arms Inn, Thrapston committed suicide by a gun shot, having gone missing from home two days previously. A verdict of temporary insanity was returned by the Jury at the Inquest. (Stamford Mercury)

More from the Independent Order of Odd Fellows – 20th January 1870

The members of the Loyal Nelson Lodge 2892, Manchester Unity Independent Order of Odd Fellows held their anniversary at the Kings Arms Thrapston. A capital repast was provided by hostess Branson. (Northampton Mercury)

Yet more from the Independent Order of Odd Fellows –

The anniversary of the Loyal Nelson Lodge (Thrapston) of Odd Fellows , Manchester Unity, was celebrated at hostess Bramson’s Kings Arms Inn, Thrapston. Between 60 and 70 gentlemen sat diown to eat a cpital dinner, served in the usually creditable style of the establishment. (Northampton Mercury)

The Wellingborough district of the Manchester Unity of Independent Order of Odd Fellows held their annual half-yearly meeting in the lodge room at the Kings Arms Inn, Thrapston. (Northampton Mercury)

A Vestry meeting appointed the landlord of the Kings Arms Inn, Mr Taylor, as Assistant Overseer of the Parish. (Northampton Mercury)

Members of the parish church choir were treated to a trip to Hunstanton on the London & North Western Railway. A saloon carriage was chartered and 43 members of the choir  with about a dozen adults occupied the carriage. Refreshments were supplied by Mr A Taylor, Kings Arms Hotel, Thrapston. Lunch was eaten as the train approached Wisbech, dinner at two o’clock at Hunstanton and tea at the same place with plenty of shrimps. After enjoying a “whiff” of the briny” and engaging in the usual seaside pastimes, the happy party returned home. Great credit is due to the originators of the holiday who collected about £10 for the purpose. Neither must be forgotten the excellent catering of Mr & Mrs Taylor, which contributed so much to the day’s enjoyment. (Northampton Mercury)

The Chicherley Lodge of Freemasons, No 607, held their lodge meeting at the Kings  Arms Hotel. The banquet was ably placed on the table by the enterprising host and hostess of the Kings Arms Hotel, Mr & Mrs Albert Taylor. (Northampton Mercury)

The Quoit Club held their committee meetings at the Kings Arms Hotel. They would also celebrate the end of season with a supper in the large club house attached to the Hotel. A capital supper was served by Host Gray in 1889. (Northampton Mercury)

An accident happened during the Michaelmas Fair to Mr Elderton, of Ellington, who slipped backwards in the yard of the Kings Arms Hotel, and sustained a severe injury to the back of his head. Dr Masters was called in, and after treatment, the sufferer was sent home in a fly. (Northampton Mercury)

Mr J. T. Whitney was accepted as the succeeding tenant of the Victoria Hotel at Rushden.  Mr Whitney has been proprietor of the Kings Arms Hotel at Thrapston for four or five years, and during his tenancy made himself very popular. This hotel has been greatly improved and has the credit of having a good market trade. (Northampton Mercury)

Mr William Beal is spoken as the successor to Mr Whitney. Mr Beal is the duly appointed Veterinary Surgeon under the Contagious Diseases (Animals) Act and has a good local practice. He is well known amongst all the farmers for many miles. (Northampton Mercury)

Had one child that died soon after birth