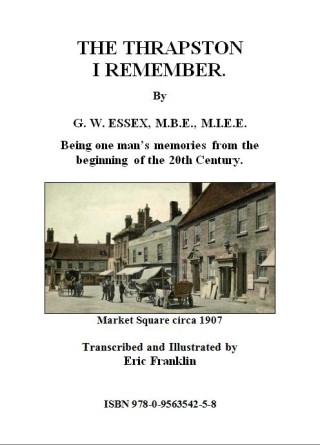 “The Thrapston I Remember”

Memories of Thrapston places, events and people from the early nineteen hundreds.

Description of the four day fair, including details of the prizes from the 1906 programme, a list of events for the 1909 programme and details of 26 competing clubs from across the country (some as far afield as Gloucester, Leicester and London).

Some months ago, I started looking into the early days of the Thrapston Harriers, mainly with a view to finding out about the early Olympians, William “Buff’ Coales and Frederick Newton Hibbins, both of whom were medal winners, in 1908 and 1912 respectively.

As part of this, I asked whether any members of Thrapston District Historical Society had any details or pictures which would assist me. Gordon Borrett kindly loaned me George Essex’s early memories, part of which spoke of the Harriers. Reading through, I was struck by how little was familiar to me (a relative newcomer to town) and how few memories would still be recalled by our more senior residents. For this reason I decided to produce this little gem to give a picture of how life used to be one hundred years ago.

Most, if not all, of the people mentioned are no longer with us; many of the buildings have long since been demolished; organisations and clubs which once had national and international status are but memories; and major town events to which the majority of the population came are now reduced to one, the Charter Fair.

With the exception of a few spelling corrections, this transcription is exactly as written in 1966. My additions are in italics.

All profits from this booklet will be given to the Thrapston Heritage Centre of which, I think, George William Essex would have approved.

My thanks to Gordon for the loan of the original, to any members of the Essex family I have not been able to discover and to my small team of proofreaders.

This booklet is © Eric Franklin and should not be reproduced in any form without express permission.

The Booklet is available  at £3.50 from “Forget Me Not” High Street, Thrapston or by email to  thrapstonheritage@gmail.com