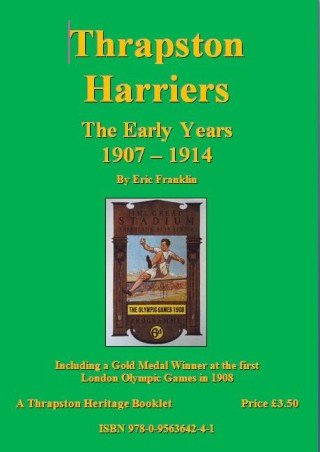 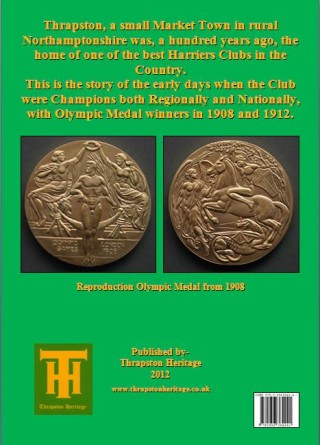 Between 1907 and 1914, Thrapston Harriers were one of the best known running clubs in the land, competing on equal terms with the likes of South London, Small Heath and Birchfield Harriers. Between the club’s formation in 1907 and the beginning of the Great War in 1914, members won regional and national titles; represented their country in international matches; and two of them competed in the Olympics and returned home with medals. The club’s reputation was aptly summed up in a newspaper article in 1912:

” For its size the little market town of Thrapston, in Northamptonshire, holds a remarkable position in the world of athletics. The foster-parent of the town’s athletes is the Thrapston and District Athletic Club. For a great number of years the club has promoted one of the most successful meetings in the Midlands, but it was not until it developed a harriers section that the club became known beyond its native county”.

As well as runners, the club also had champion cyclists, one member was an international skating champion and olympian (Walter Dix) and they even had an honorary member, Mr. W. M. Plevins, who held the world record for fly-casting, an honour he achieved in Central Park, New York in 1908.

Virtually all the Harriers were local men, either living in Thrapston or close by. Amongst the men who performed heroically during the eight years covered by this booklet are the surnames Coales, Hibbins, Broughton, Waite, Headland, Glover, Thompson, Hudson, Fellowes, Kimble, Booth, Cunnington, Gilbert, Peasgood and Church. A full list of all known men can be found on page 30.

This booklet is not intended to be a comprehensive record of these early days, but more an overview of all that was created by dedicated organisers and runners. The cut-off point is the beginning of World War I, when many of the members enlisted to do their bit for King and Country, some making the ultimate sacrifice and not returning. Had the war not started, who can say how pre-eminent Thrapston Harriers could have become in the land? Judging by the early years, there was every chance that they would have been a major force.

Most of the detail in the following pages has been gathered from local newspapers, held at Kettering Library – the Kettering Leader, Kettering Guardian and Evening Telegraph. It is unfortunate that copies of the Thrapston Journal for this era were never kept, as I am sure they would have provided a wealth of detailed information. Much of the Olympics information was found on general internet sites. Illustrations are either from local newspapers or my personal archives and are acknowledged individually.

The Booklet is available  at £3.50 from “Forget Me Not” High Street, Thrapston or by email to  thrapstonheritage@gmail.com

First published in 2012 by Thrapston Heritage

All rights reserved. No part of this publication may be reproduced in any form or by any means without permission from the author.

An introduction to the Harriers club, outlining its activities, successes and some memorable local names.

The team wasn’t quite as successful this year although “Buff” selected to run for England at an International race in Paris.   “Buff” continued to excel and in June “Buff” was selected for the 5- and 3-Mile races in the Olympic Games held at the White City Stadium.  “Buff” won a Bronze medal.

The Harriers had a new star runner, F.N. Hibbins (then aged 18) achieving good results. However, it wasn’t all glory; at the National Championship in Derby the Harriers only managed 16th out of 20, due in part to neither “Buff” or his brother being fit and Hibbins taking a fall halfway through.  However, in September “Buff” won the 3-mile race for England in Stockholm.

Hibbins continued to run well and helped his team to many successes during the year.

Hibbins was selected for the Stockholm Olympics but didn’t perform well individually in the 10,000m and 5,000m, however his performance in the team event helped England to third place.

In general, it was however a disappointing year compared with previous years, possibly due to some extent by the passing of the years of some of the prominent previous winners.

The Harriers poor form continued with highlights from the three runners, Guest, Tebbs and Church.  The final race, before war was declared, was a 12 mile marathon run at Kimbolton, which was won by C.B.Church.