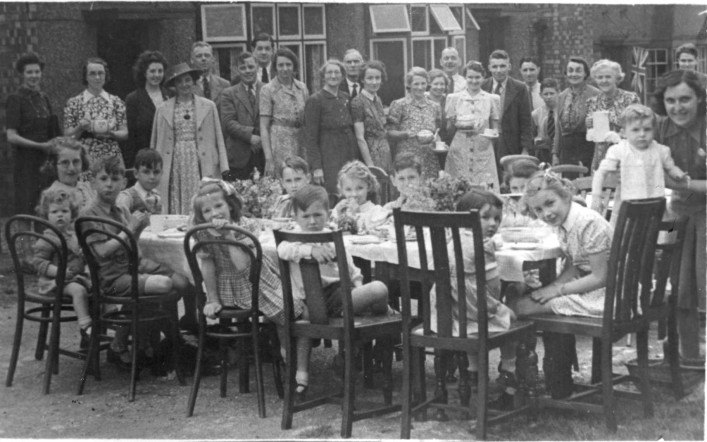 Party for the children of Oakleas Rise

Adults, from the left, clockwise:-

Mrs Franklin  ( She was a machinist at the Thornelow & Clarkson clothing factory in Oakleas Rise. Her husband, Charlie, worked at Stewarts and Lloyds, cycling to Corby everyday)

Mr (Reg.) Loakes  ( Reg was Managing Director of the building firm Loakes and Pettit, which built most of Oakleas Rise)

Mrs (Win.) Dodson  (Win was the widow of Sam Dodson who, with Claude Horrell, created Dodson and Horrell)

Mr (Ernie) Todd (Ernie was a baker, with a bakery originally in Barnwell, and later in Market Harborough. His mother lived in Oakleas Rise.)

Mrs (Amy) Loakes  (Amy was the owner of Loakes and Petit at this time, and she lived in the building which is now The Bridge Hotel)

Continuing clockwise around the table:-

The buildings that became The Bridge Hotel,  at the time doubled up as the business headquarters of the firm Loakes and Petit.

In addition “Oakleas” is an anagram of A(my) Loakes name.