The following is a summary of the main business of the council until 1920: The  council made unsuccessful attempts to get  the Justices room at the Court  House  for  their  meetings and continued to meet at the school until they moved to the Temperance Hall in Bridge Street.

The first important business for the Council was the provision of a Cemetery. 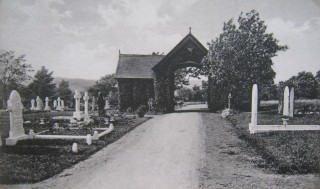 The council borrowed £900 to organise the cemetery and the building in it. A  caretaker was offered  3s/6d a day when employed by the council.

This subject engaged the attention of the council for many years. The county council was keen to get positive action but the parish council was complacent. They replied –

“In the opinion of the council, the arrangements for the town  of  Thrapston  is  the  very  best  that  can  be  made…the system has worked satisfactorily for a great number years and only  requires  periodical  attention  at  the  outfall  which  the council will consider it their duty to give”

No doubt the drainage system was very antiquated. At  that  time  sewage was fed via old field drains into the Three Arches brook, relying on storm water to bring it to that point. Then it was fed  into the river between the bridge and Islip Mill.  It is clear from the minutes that the periodical attention to  the  “outfall”  simply  involved  employing men with horses and carts to clear the  outfall  and spread the soil on to the “lush” meadows! Unfortunately letters received from the County Council do not appear in the minutes. They would be interesting reading. In 1897 the topic was revived by a request for the Swiss Cottages at the  top of Huntingdon Road to be connected.

At last the County lost patience and took legal action imposing a time limit for cessation of pollution of the Three Arches ‘ditch’. Surveyors were appointed to examine the problem and at a meeting of October 1897 it was proposed that 12 yards of 12 inch pipe be laid at once from the corner of the gas works down to Mr Smith’s meadow.

Later, tenders were invited for a sewage disposal plant but the advice of the Local Government Board to exclude storm and surface water from the sewers was ignored and led to trouble later especially along Chancery Lane. In 1900 it was decided to raise a loan of £4,000 over 30 years with a time limit of 9 months for the work to be completed. In July 1901 it was proposed

“that  a  man  be engaged  full  time  by  the  council  to  combine  duties  of Caretaker  of  Cemetery,  Manager  of  the  Sewage  Works, Lamplighter, Drainage matters and Cleaner combined. 27/6 to be paid for the above. “

In 1907 the sewage could not be pumped because of floods. The council pointed out to the County that one source of trouble was fine silt washed from the roads which were not the responsibility of the parish. In the same year the council purchased   a  Sanitary  Cart for removal of all sanitary matter and refuse in the parish, and the inhabitants were permitted to put ‘non offensive rubbish’ into the sewage works field.

An important duty of the council was to lay dust in dry weather. Expenditure could amount to £10 or £20 per month and the water cart pumps needed frequent repair.  The cart remained in use for many years.

Efforts to provide a recreation ground in 1895 by public subscription was unsuccessful because the council did not conform to the provisions of the ‘Public Improvement Act’ and subscriptions,  including £l00 from Lord Lilford had to  be returned.

In 1909 the council was pressed to consider the supply of drinking water to householders and a committee was appointed to report. It was concluded:

”  The  committee  having  made  a  house  to  house inspection as to the  water supply of the town….find that there is  an  abundant  supply  of  water  for  domestic  purposes throughout  the  town  and  good  drinking  water  is  obtained either upon the premises or within a reasonable distance from each dwelling.”

The parish had had a fire engine for many years. William Lord (saddler) was captain when the council was formed. His request, in 1907,  for new uniforms was turned down and this rebuff may have caused his resignation soon after. Obadiah Booth, previously secretary, was appointed Captain and he retired in 1921 having completed 50 years in the brigade.

In June 1921 the brigade attended a  big fire at Little Addington and £12 .13s was paid to those manning the pumps. At the rate of 1/- per man per hour it may be seen that the fire was quite extensive.  The brigade was paid for all fire-fighting outside Thrapston  and in addition the person requesting help had to send two horses to pull the engine.  In 1913 the council turned down a suggestion that they should contribute to the Kettering Fire Engine.

The Thrapston Gas Works was established in 1857 at a cost of £1600 and manually-lit street lights were in operation before the council was formed. When the council assumed responsibility the lamplighter was given  specific instructions. For instance in 1911:

“between  September  1st  and  April  30th  and  on  May  Fair night and  Sport night all lamps to be lighted each night except for  three nights before and one night after each  full moon.  If the aforesaid nights prove cloudy or dull the lamps are to be lit”

Lamp lighting commenced half an hour after sunset and extinguishing began at 10.30  pm.  All-night lamps were extinguished at 6 am.  The routes to be taken on alternate nights were:

All-night lamps to be lit half an hour after sunset and extinguished at 11 pm.”  Lamp lighting was carried out by the Cemetery caretaker and for this (after a rise in 1913) he got £1 per week.

Experiments with incandescent burners on street lamps progressed slowly and the changeover was not complete until 1922.

The July 1914 meeting postponed the drinking water question and not until December of that year was the war mentioned when the council considered the advisability of trying to arrange for soldiers to be billeted  in Thrapston.

In February 1915 householders were advised that the gas supply would be turned off if there were any signs of air raids or other disturbances.  People were urged to turn off gas taps and gas meters every night.

In July National Registration was carried out and local elections were postponed for a year.

In 1916 it was decided not to light public lamps and in 1917 the council called a public meeting to publicise the Red Cross, and  in the same year the building  25  new  houses  was discussed – a  number subsequently increased to 35.

In 1919 a War Memorial and Peace Celebrations were discussed.  A Town Meeting was held on June 2nd and a peace celebration parade took place on 19 July; the Peace Memorial Recreation Ground became a reality on 20 October 1920.

Some other items of interest may be briefly mentioned.

The council discussed the possibility of becoming an urban power as early as 1912.

In 1918 it was decided to spray the potato crop at the sewage  works but, at the  September meeting the council expressed disapproval that it had been done on a Sunday.

The Kettering postmaster unsuccessfully appealed for a half day’s holiday for postmen on Saturday and an attempt to abolish evening  delivery  of  letters resulted,  begrudgingly, into agreeing  to have no letters delivered on Thursday evening.

A request from the Rural District Council for a public convenience was turned down as unnecessary.

Even in 1922 motors caused obstruction in Fair (Chancery) Lane on market days. This is still echoed now so nothing is ever new.