You are here: Home>Topics>Events>Floods>Thrapston Floods 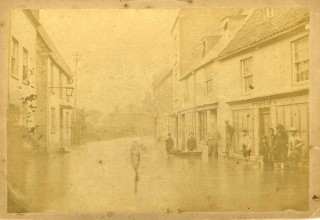 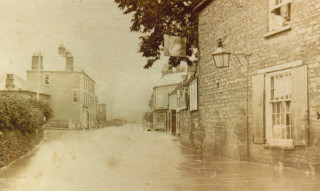 Thrapston Floods, 1875 (outside The Swan) 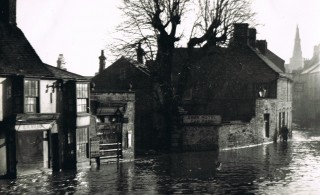 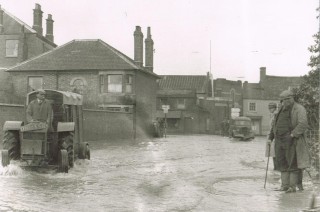 The floods  lasted two days and many people lived upstairs for weeks. The receding waters left a most disagreable smell – it was “too awful for words” was a contemporary observation.

Homes were flooded as far as the White Hart Hotel. Mr R Tustin’’s grocery and drapery business at the corner of Midland Road suffered severely.and all kinds of hardware floated into the street.The younger generation, in washtubs or on stilts recovered the truant articles.

Mr William Read, cabinet maker, next to Mr Tusting’s had considerable damage and furniture floated about.

Vehicles took sightseers through the floods for a penny.

These were thought to be the worst floods for 50 years. Mr Geary at the Kings Head could not open his bar one night. Awakened at 2 o’clock the previous morning he plugged his front door with putty but water came in the back and rose 15 inches in the scullery and most of the furniture was moved upstairs. Mrs. Geary was marooned upstairs on her birthday.

The licensee of the Swan Hotel, Mrs M Hopper, assisted by men from the brewery had the task of cleaning 8 rooms and a cellar. The flood took her unawares with no time to remove furniture and carpets. A kind friend gave her a flask of tea which was hauled up to the bedroom window in a
stocking. Food reached her by the same method.

Messrs J Scott had 18 inches of water in their timber yard but were able to save their wood shop. The offices of Loakes and Pettit in Bridge Street flooded and the Plaza Cinema had to be cleaned and dried out.

When Mr J Hunt of 7 Cosy Nook returned home from night shift at Stewart and Lloyds at 7a.m. water at home was above his Wellingtons. Mr and Mrs G Cobley, two octogenarians sleeping downstairs in the same house had been taken upstairs. The front door was kept shut and the backdoor opened to let the water rush away, leaving 6 inches of mud in the living quarters.

When a telegram arrived for a householder in Midland Road it could not be delivered and the message was shouted across the intervening water. The postman obligingly sent a wire back and was paid the next day.

County Council road men were kept busy cleaning out gutters in the main street of Thrapston.