You are here: Home>Topics>Community>Utilities>A Water Supply for Thrapston

A Water Supply for Thrapston 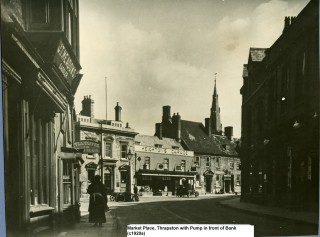 Even before the formation of the Parish Council in 1894 the Local Government Board had reported that the entire supply of water for Thrapston consisted of 4 public wells and about 70 private ones, and that a large proportion of the water was unfit for drinking.

In 1909, Dr Elliott, from Oundle, analysed water from the town and he concluded that little had changed since the 1894 report, except that the Town Pump on the Market Place and its well, which had been condemned at that time, had been thoroughly cleaned out.

Discussions on a new supply

In 1914, the Market Place well had a bad report again and the Parish Council and Thrapston Rural Council agreed it was time to have a proper piped supply. Engineers made a survey and found that there was no adequate supply in the parish and so recommended a well to be sunk in the gravels of the Nene Valley.

World War 1 resulted in there being no progress until another report in 1923 which confirmed the need for a new scheme. Drayton Estate offered a supply from its well which was already supplying piped water to Islip. The Parish Council considered the Islip offer and also a site, in Woodford parish.

The Parish Council concluded the Woodford site was the more economical and this scheme was put forward to a meeting of ratepayers in the Temperance Hall on 2nd February 1926. The cost of the scheme was £8,400 and it was approved by 75 votes to 6.

Following objections, on the grounds of cost and an existing plentiful supply of water from springs in the town, a local enquiry was held at the Temperance Hall on 7th July 1926. A preliminary trial was agreed which proved to be satisfactory, both as regards quantity and quality. The scheme was then implemented fully.

Supply was estimated at 50,000 gallons per day, pumped into a reservoir at the highest point of the Huntingdon Road to serve all parts of the parish. Constructed of reinforced concrete it was roofed over and covered with earth. The supply was completed towards the end of 1929, 35 years after that initial report.

An extract from an article by Cyril Diamond from “Strapetona” – The magazine of Thrapston & District Historical Society.