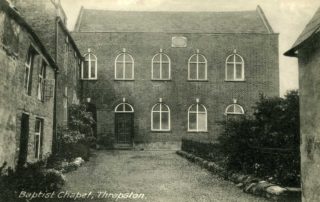 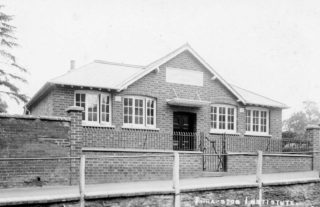 Thrapston and its Baptist Church

In 1662 the Act of Uniformity received the Royal Ascent of King Charles II. As a direct result Thomas Tarry, Rector of Thrapston and 60 other clergy in Northamptonshire were ejected from their living. Mr and Mrs Tarry were reduced to near poverty and Mrs Tarry made “band strings” for a living.

The ‘Non-Conformists’ continued to worship in their own way in little groups, sometime as in Thrapston, meeting privately for ‘lectures’ with Prayer and Bible-reading.

In time, Conformists and Non-Conformists became agreed on the essential principles of Protestantism and freedom of worship became the acknowledged right of the British people.

About the middle of the 18th century the ‘Society of Dissenters’ felt the need of a permanent place of worship. At first this was a house in Thrapston. Then with a legacy  from a person of fortune, together with a further gift of £5O and a subsequent subscription of £15O, they were encouraged to erect a new Church Building. It was opened for worship, with a gathering of people from a wide area, on March 27 1788. The Rev. Reynold Hogg was its minister from 179O to 18O7 and through him Thrapston became linked with the formation of the Baptist Missionary Society.

The Missionary Society was a movement that changed World History. Fourteen people, thirteen of them ministers, met in Kettering on Oct 2 1792 and appointed Andrew Fuller as their secretary. Reynold Hogg was the first Treasurer and William Carey the first Missionary and pioneer of the modern missionary movement.

The same spirit which caused Hogg to become a leader in the Missionary enterprise led to the opening of more Meeting Houses in Islip, Bythorn and Woodford, while Hogg left a legacy of £20O to maintain a chapel in Titchmarsh. Reynold and Ann Hogg were buried in a vault in the Church and a memorial plaque put on the wall.

The Baptist Meeting House was a centre of education.  Mrs Mary Ekins  who died 1794 and whose memorial tablet describes her “almost unparalleled fervor” gave £200 for establishing a school “at or near the meeting house of the Protestant Dissenters in Thrapston”. This was the Mary Ekins Charity.  The income was invested for the use and benefit of the master of the school who should teach ten boys for three years to read, write and cipher Five boys were to reside in the parish of Thrapston and the other five in the parish of Islip.

The choice of the master was vested in the male members of the congregation of the Calvanistic Baptists in Thrapston, called the Church. During the last century the school developed and became the British School for Thrapston and District. William Griffin, one of the first inspectors of the school, left money invested and the income was  distributed among 50 poor people (the Griffin Charity).

In later years the name of Mr Nathaniel Smith and others are associated with the organ which was installed in 19OO. Mr ‘Nat’ Smith and his five brothers played an important part in the industrial life of the district. He was the inventor of the famous pulley of world repute. His father, also Nathaniel Smith, was born at Broughton in 1814 and spent his early life in Stamford and moved to Thrapston c1854 and was a prime mover in the erection of the Temperance Hall in Bridge Street This has since been demolished. He died in 1897.

Mr Rennie Wilkinson of Shooters Hill Great Addington also a staunch Baptist gave £2OO towards the building of the Thrapston Institute which opened in 1906. The site was provided by the Church in its own grounds and it gave the townsfolk an opportunity to play billiards and other games as well as providing a reading room and a bowling green at the rear.

Through the years the Baptist Church has rendered a public service in Thrapston which lacked many of the social facilities provided in larger centres and today we can find names of public spirited citizens in the graveyard at the rear of the Church.

( This brief account is based on a booklet published in 1937 appealing for funds to carry out essential repairs to the timbers of the Baptist Church. There is a brief, biography of Nathaniel Smith Senior in “Souvenir of the unveiling ceremony of Bettering Temperance Worthies” November 19th 19O8.)