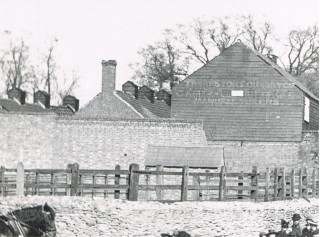 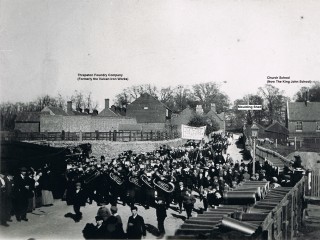 Mark Payne was born in Geddington in 1822. He worked in Lincolnshire, and in particular Grimsby, where he met and married Charlotte Taylor.

In 1853 they moved to Thrapston with their four sons (Charles, John, William and Matthew) where Mark immediately opened an Iron Works at the top end of Hortons Lane.

Over the next 13 years Mark and Charlotte had another 6 children including a son Walter Samuel.

The ironworks factory extended from Hortons Lane, parallel to Market Road, and was partially on the site now used by the sheep market.

The last two houses in Hortons Lane were built by Mark Payne. Mark and Charlotte originally lived in the larger house, called Vulcan House. Mark then built the smaller house for themselves and Charles, and his growing family, moved into Vulcan House.

The ironworks had a timber framed building covered with corrugated iron on the corner of the field on the other side of what is now Market Road. It was at the end of the quarry used by Smith & Grace, next to the original church school. This site is now the northern end of the Bowls Club, alongside The King John School.

This timber building was used for dealing with the mouldings which involved very hot metal. Fires were common and this type of building was easily replaced. It was also a good, safe distance from the main factory!!

The hot iron was carried in moulding ladles across the road to this hut so it is fortunate that the road was infrequently used by others.

In the 1870s the firm was sold and it became known as Thrapston Foundry Company or Neilson’s Iron Works.

Mark and Charles moved to Upper Field Street, Kettering where they established a new Builders & Contractors business together with Matthew, another son.

Neilson’s made among other items, gates and fancy fireplaces. The firm went bankrupt in the 1890s and the building was dismantled sometime after that and by the 1920s was being used for allotments.