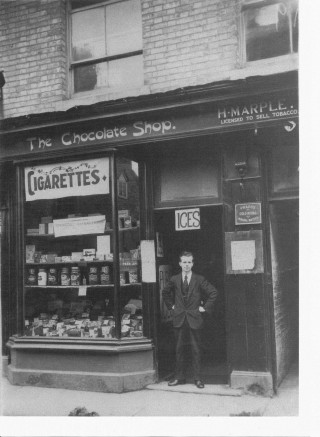 They bought the shop known as ‘The Chocolate Shop’ on Bridge Street. The shop sold confectionery, tobacco etc.
There was also a small tea shop for which Nancy made homemade ice-cream. As the shop sold jam it was assumed that Nancy also made this, as she continued to do so for the rest of her life.

Mementoes of the shop

Nancy owned two of the tables from the tea shop until her death on 14 September 2000. Henry had previously died on 14 May 1980.

Henry and Nancy had three children but their daughter, Rosemary, was born in the flat above the shop on 18 October 1930. The doctor lived in a large house on the hill and Henry had to fetch him to be in attendance for the birth of their first child.

It is thought that Nancy and Henry lived in the shop for approximately three years. As this was the time of ‘The Depression’ no one had funds to buy confectionery and tobacco and so they sold up and moved from Thrapston to the south of the county of Northamptonshire, nearer to Nancy’s parents (as Nancy’s mother was ill),
As Rosemary Braggins (nee Marple) died on 5 April 2007 it is unfortunate that no further facts can currently be ascertained.
References:
From  an account given to Thrapston District Historical Society by Rosemary Braggins
Tags
Chocolate Shop (1)