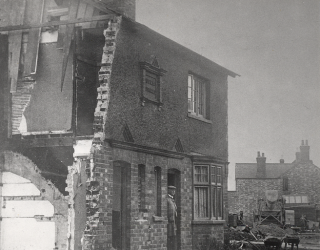 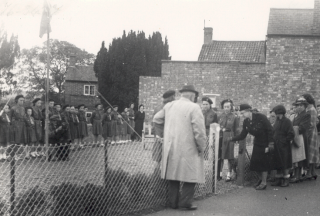 The piece of land now called Coronation Gardens was once a row of cottages and included Mr Clark’s Fish Saloon at No. 13.

The cottages were adjacent to St James’ Churchyard and known locally as Jubilee Cottages. There was also a small courtyard known as “Canary Court”.

While these cottages were in place the road was called “Titchmarsh Lane” and was not much more than a track in parts.

As motor traffic increased between the wars it was decided that Titchmarsh Lane should be improved by being made wider and have a solid surface. It would then become the main road to Oundle , diverting traffic away from Titchmarsh village. Its name was then changed to Oundle Road.

During the early 1930s several cottages, on both sides of the lane, were demolished, including Jubilee Cottages.

The land continued to be used in this way until the early 1950s by the Highway Department, For reasons cloaked in local government rules, the Parish Council was then left with the responsibility of keeping the piece of land tidy to stop it becoming derelict.

In 1953, Coronation year, the Girl Guides and Brownies decided to make better use of the land. They created an area with flower beds and seats and obtained sponsorship to pay for the work.

This area was then renamed as “Coronation Gardens” in honour of HM Queen Elizabeth II.

For the next 40 years or so the Parish and,  from 1974, the Town Council maintained the gardens by removing litter etc. but, understandably, did not do not much towards replenishing the flower beds or seats as they were broken, as Northampton County Council still owned the land.

In the early 1990s the Town Council decided that something had to be done to improve the gardens and so negotiated the purchase of the land for £1. Sponsorship was obtained for seats and the area was paved.

Finally, in 1994, the Coronation Gardens area was re-opened by the Town Mayor, Cllr. Liz Treacy and it continues today to be maintained by the Town Council within its Land Maintenance Contract.

Further information can be obtained from Thrapston Town Council Information Leaflet No. 15. Available from the office on Oundle Road, Thrapston.