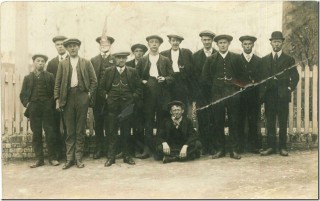 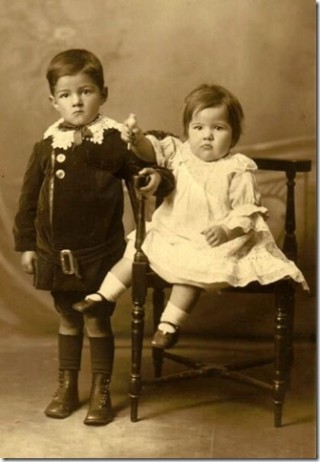 A Thrapston court judge once said that “Ringstead has had more bad luck and tragedy than any other village or town when it comes to self-inflicted death”. This story about Harry William James Cope reflects that view.

James Cope and Jane Hillson were married in 1862 in Ringstead and had several children, including Harry William James who was born late 1877. Tragically Jane died aged 35 years, in 1881 very soon after the birth of their daughter Ruby.

In 1886, James subsequently married a second time to Hannah Austin.

In early 1909, Harry married Lucy Bird and they moved to their new home in London End Cottage, Ringstead. Their family began with Reginald who was born in 1909 (but who probably died sometime after the 1911 Census), followed by Harold in 1910 and Ronald in 1911. Lily, their daughter, was born in 1916.

Lucy suddenly became ill towards the end of 1917 and quickly died after suffering a terrible fever. Harry was left a widower with three children.

Harry was working for the Regulation Boot Company in Raunds and would have been well aware of the terrible conflicts in World War II.

The Military Service Act in 1916 had enabled the British Government to begin conscription for single men aged 18 to 41 years old. Exemptions were allowed and so a system of Military Service Tribunals was established to adjudicate claims on the grounds of civilian work of national importance, domestic hardship, health and conscientious objection.

Later in 1916, because of the need for more men, married men were included on the list for the first time. So until then Harry would have had no concerns about conscription and would have been satisfied to have been working in an industry that supported the armed forces.

However, from the autumn of 1916, Harry would have been eligible for conscription but to his no doubt relief, he wasn’t immediately called up.

It is possible that Harry received his call up papers the following year, around the time that his wife died and so understandably did not immediately lodge a claim for exemption.  When his claim was finally received by the tribunal at its meeting on 14th February, 1918 the military representative ruled it out of order as a late appeal. The Tribunal however asked that Harry should be graded, to see if he qualified for exemption.

Harry would have left that Tribunal very worried. It would have seemed to him that he could be called up and the welfare of his three children would be at risk.

Four days later, on 18th February 1918, after days of anguish about what would happen to him and his family he finally snapped and he murdered his two sons and then committed suicide. The dreadful scene was discovered by a friend who managed to break in after looking through a small window.

His daughter, Lily, survived because she was being looked after by Mrs Judd, a friend of the family.

The funerals were held the following week and the streets from Back Lane to the chapel were lined by crowds of people waiting for the hearse cart to go by so they could pay their respects. Many had come from Thrapston, Raunds and the Addingtons.

This was a very sad outcome due in part to poor communication and a lack of urgency on the part of the Tribunal.

What Harry would not have known was that a month earlier the County Tribunals had agreed that the boot trade of the county had sent more than their quota of men and so had recommended that the appeals of men over 35 years in the boot trade should be adjourned. More importantly, the Act had also made provision for widowers with children to be exempt too.

Lily died in 1992 in Birmingham and it is thought that she never married.