You are here: Home>Local villages>Ringstead>From agricultural worker to shoe maker

From agricultural worker to shoe maker

A typical story from the 19th Century

William is described on censuses as:

Sophia is described as a “lace maker” in the 1871 census but does not have any occupation listed in the previous censuses.  She continued to live in Wilden until her death in 1890.

Her will indicated a residue of £60, around £3000 equivalent today.

He is recorded as living with his parents on the 1851 census. However, sometime after the census he moved to live in the house of Thomas Cope, a shoe maker in Keysoe. It is not clear if this is a relative.

In 1861, James aged 17 years is described as a boarder with the occupation of shoe maker whereas another non-family member of the household is described as an apprentice shoe maker. It is not clear why there is a distinction unless James is now considered a skilled worker.

Within a year James has moved to Ringstead which at that time was one of many shoe making communities in Northamptonshire.

The industry was home based in the main but was beginning to be threatened by mechanisation. Census information suggests that there were over 100 shoe makers in Ringstead in 1861, four times the number recorded in 1841. Much of the increase may have been as a result of the increased demand for military footwear.

Jane was born c1846 in Little Staughton, the daughter of George and Sarah Hillson and was living at home with her parents in 1851.

By 1861 she was living with her mother and step-father James Smith in Kimbolton. Sarah and James had married at St Neots in 1854.

The 1871 census records James and Jane with 3 daughters, (Louisa, Eliza and Elizabeth),

In 1881, James and Jane were living on High Street in Ringstead with 4 daughters (Louisa, Eliza, Elizabeth and Minney), 2 sons (Frank and Henry) and James’ nephew, George Cope.

Henry, born in 1877, was known later as Harry William James.

In 1886, James subsequently married a second time to Hannah Austin.

Homeworking usually meant that the whole family contributed to the work. In particular, the shoe industry had many processes that needed different skills to complete the task.

A cordwainer is an old term for a skilled shoemaker who makes fine soft leather shoes and other luxury footwear articles.

James and Jane’s Gt Granddaughter recalls family memories told to her by her mother of James and Jane’s daughter and her husband taking the children to Little Staughton in a pony and trap to visit relatives and to pick cowslips. 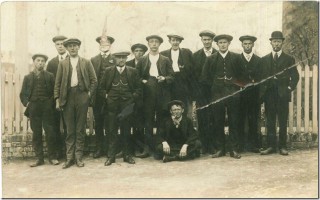 We are grateful for the information provided by Helena Meadows regarding dates and locations.